Out from among the tranquil woods

Markham-based Xiaojing Yan journeyed far into the realms of meaning and imagination to bring Out from among the tranquil woods into the visible world. Along the way, Yan collected objects of wonder and beauty – lingzhi mushrooms, star anise, freshwater pearls and cicadae – which she has intricately woven into sculptural installations that are at once fantastical and familiar. In these new works, the artist invites the viewer to explore a space inhabited by contemporary beings and forms that are infused with references to centuries old Chinese mythology, folklore and symbolism. Much like the practices of traditional Chinese painters, Yan uses an economy of means to suggest mountainous landscape, clouds in the process of formation, or swarms of flying insects. Instead of brushing ink onto a flat surface, however, Yan extends her works fully into three-dimensional space, allowing the viewer to encounter them in a more intimate manner.

Through the work in Out from among the tranquil woods, Xiaojing Yan revisits her own identity as a first-generation Chinese-Canadian. Yan’s migration experience provides her with a unique perspective through which she integrates the long history of Chinese traditions and rituals into her contemporary, global understanding of the natural world. In so doing, Yan approaches a central theme of the exhibition – the gaps between the foundations of Western and Eastern ways of knowing. In much of Western philosophy, culture and nature exist as a duality, two very different and segmented arenas of everyday life. In Chinese philosophy, however, the two are viewed as an inseparable continuum, they are one and the same. As such, Yan brings into her practice the idea that every living thing is imbued with a spirit – a vitality or ch’i that flows through all flora, fauna, animal and human beings. Her work, thus provides a lens through which the viewer might uncover some of what is lost in translation between languages and ways of knowing. Yan offers an optimistic vision of the seemingly unbridgeable gaps between the East and the West, between the past and the present, between culture and nature, and ultimately between life and death. 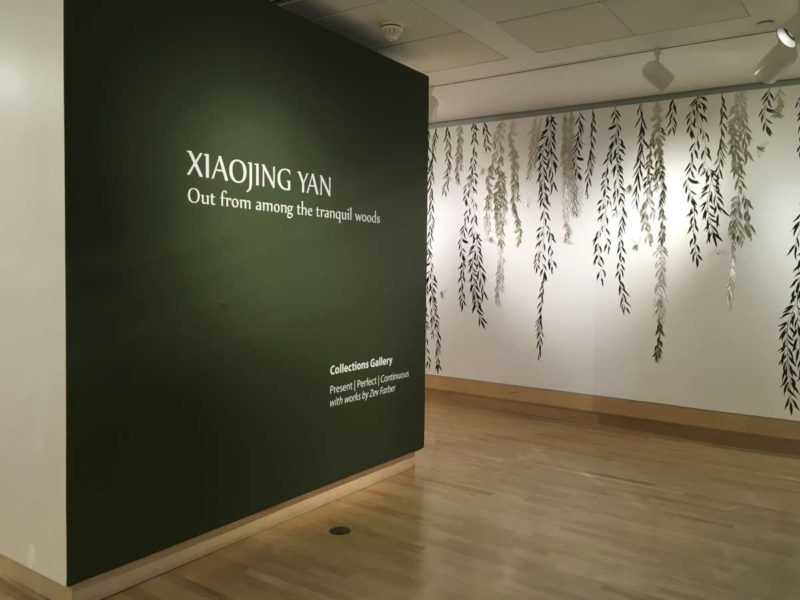 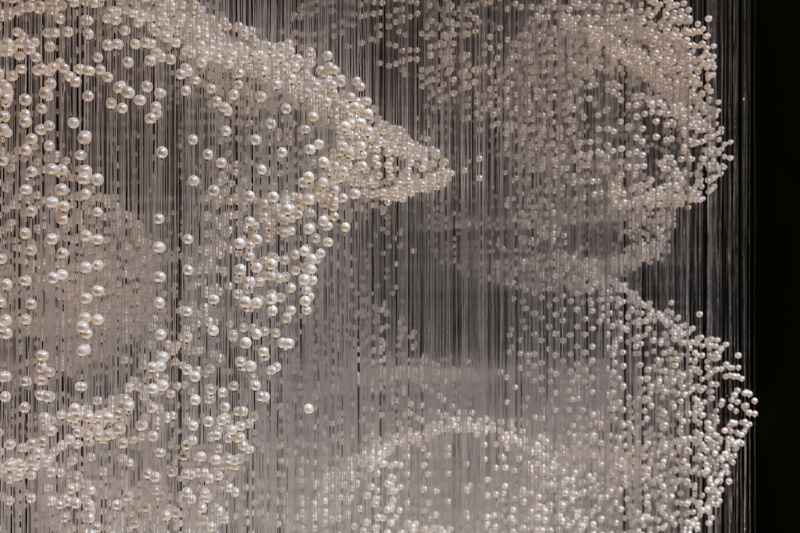 Developed from her ground-breaking 2014 piece Cloud Cell, Xiaojing Yan’s Spirit Cloud owes its ethereal form to the shape of lingzhi mushrooms, smoke and clouds – all of which are linked by the tension between ephemerality and permanence. Traditional interpretations of clouds as symbols of good fortune are echoed by the lingzhi mushroom’s association with longevity, as an ingredient in a legendary elixir of immortality. The form in Spirit Cloud is held in suspension between 2 monolithic rectangular prisms, echoing the theme of transient phenomena, hovering between one entity, reality or universe and another. 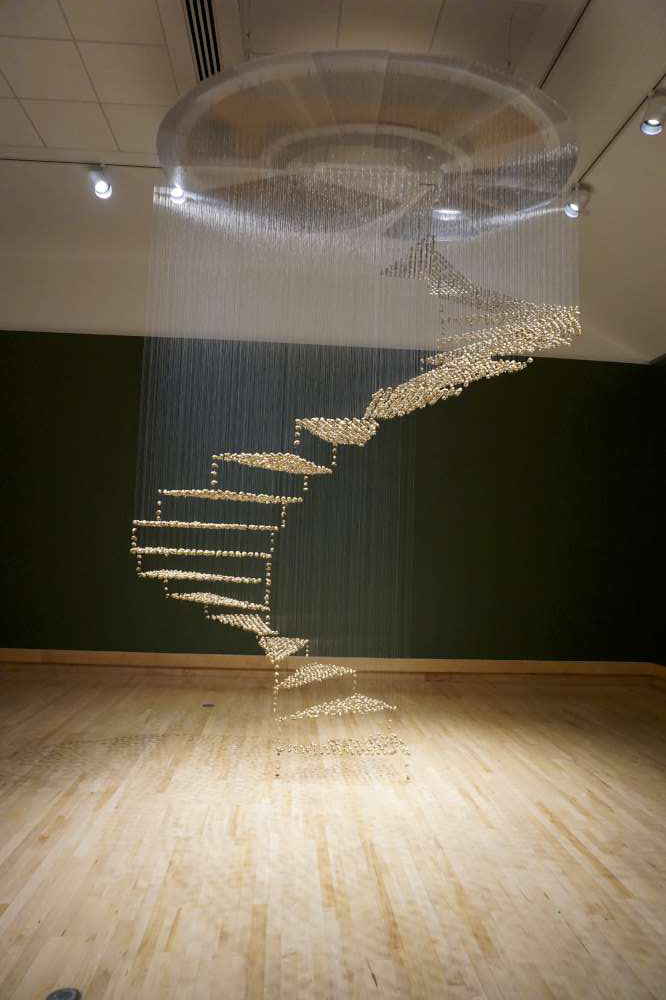 This work, created from the exoskeletons of thousands of cicadae, spirals around many potential interpretations, leading upward to a place of endless possibility. The cicada is an insect that garners a great many symbolic associations in Chinese literature. As nymphs, these insects live underground at the base of trees for as long as 17 years before climbing up to the tree tops to shed their nymph exoskeletons. Because of this behavior, they are associated with rebirth and immortality. They are even believed by some to connect the heavenly and earthly realms. Similarly, stairways are transitional spaces, and Yan’s choice to arrange these cicadae into this spiraling form echoes not only the journey of the cicadae, but also the many transitional moments we encounter throughout our lives. This series of female busts is an extension of Yan’s interest in the attributes of and meanings associated with the lingzhi mushroom. Yan has experimented to produce sculptures that integrate the natural growth cycle of this mushroom and highlight its amazing properties, such as adaptation, self-organization, self-healing, and regeneration. While evoking traditional Chinese medicine, mythology and religion, the lingzhi mushroom, as an innovative green material, also speaks to the role of environmental sustainability in contemporary art production. Furthermore, Yan employs the repetition of the eight heads to refer simultaneously to the eight immortals of Chinese legend as well as to contemporary China’s dependence on mass production. As with Yan’s Lingzhi Girls, this sculptural arrangement was created almost entirely of lingzhi mushrooms. Mushroom spores were planted inside moulds where they were exposed to moisture, fostering the growth of networks of mycelium (mushroom roots). The mycelium eventually filled the moulds, creating the forms of a young girl, a deer and a group of rabbits. Once these forms were removed from their moulds into another moist environment, mushrooms developed out of the figures. These new mushrooms, in turn, dropped more spores, thereby providing the delicate brown powder that now covers the sculptures. Similarly, multiple meanings grow out of this work. Deer, for example were often held in high esteem in China because they were believed to be skilled at finding sacred mushrooms in the wild. As a result, in many Chinese paintings deer are portrayed with lingzhi. The rabbit, called in Chinese the Jade Rabbit or the Moon Rabbit, is also a symbol of longevity. It is believed to live on the moon with the Moon Goddess who never grows old and who makes a mysterious elixir of immortality with a mortar and pestle. 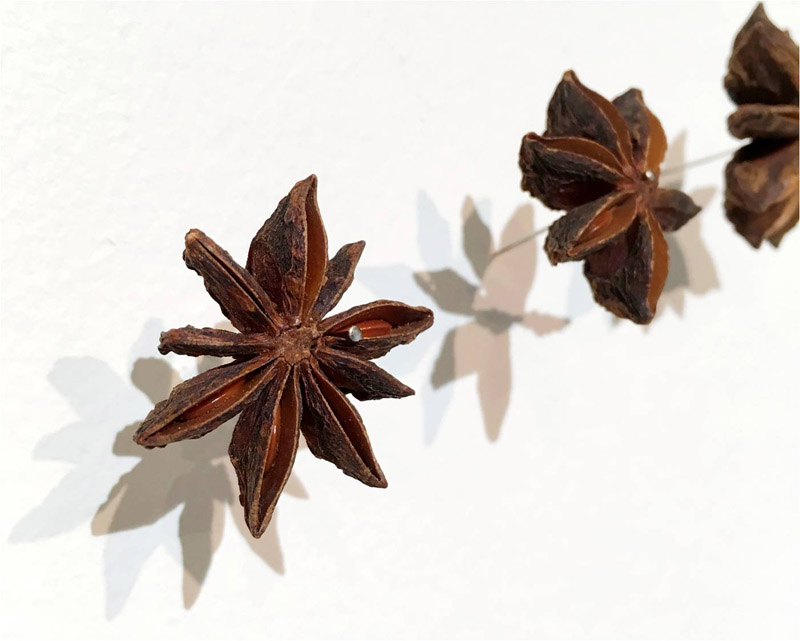 Like many Chinese artists, Yan was introduced to visual art through Chinese ink painting – exploring popular motifs of clouds, rocks, mountains and water. Mountains are sacred spaces, regarded by some as a gateway between the mortal world and the heavenly realm. With Star Mountains, Yan reinterprets shanshui paintings and the legends associated with the deepest mountain wildernesses by utilizing an unconventional material – hundreds of dried star anise pods. These pods and their shadows suggest a landscape inhabited by the silhouettes of trees, creatures, or people. With its strong aroma, star anise is an ingredient widely used in Eastern cuisine. As with the imagery of Chinese ink paintings, the scent of star anise transports the artist back to her early experiences in China. The intangibility of the aroma and the ephemeral shadows of the star anise on the wall are key ingredients generating the atmospheric quality of this work – which is both here and there at the same time. 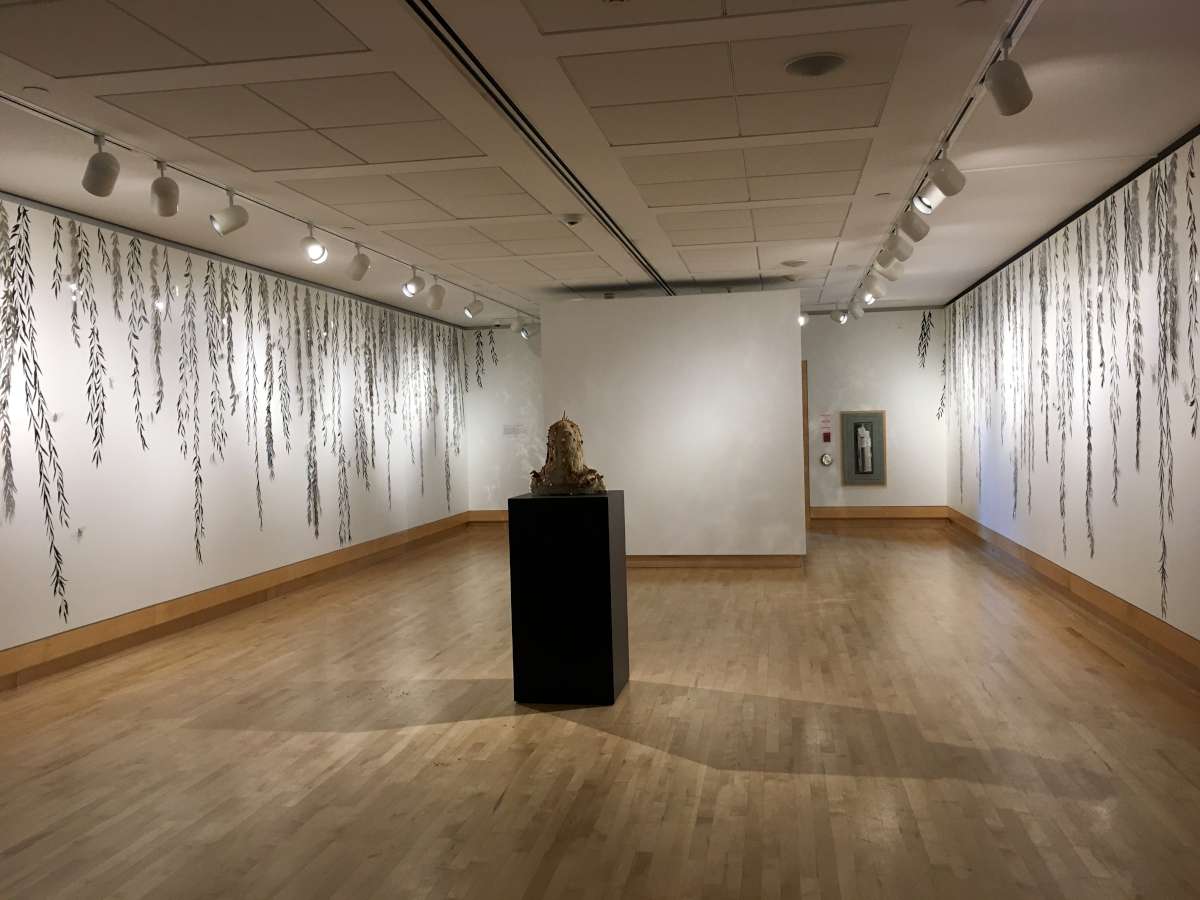 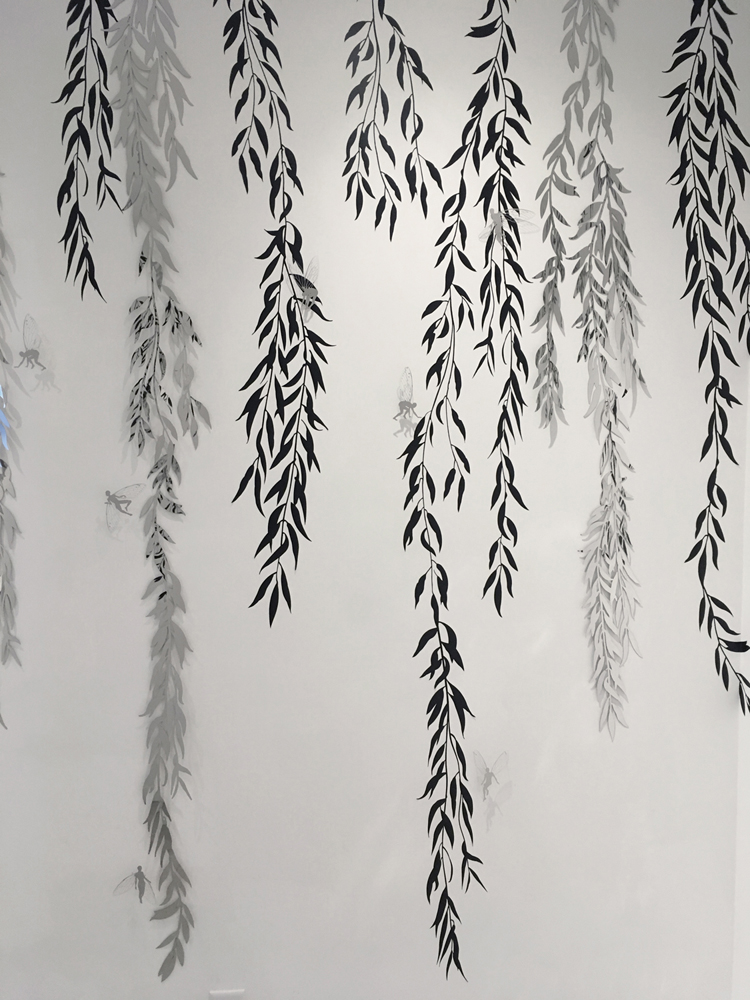 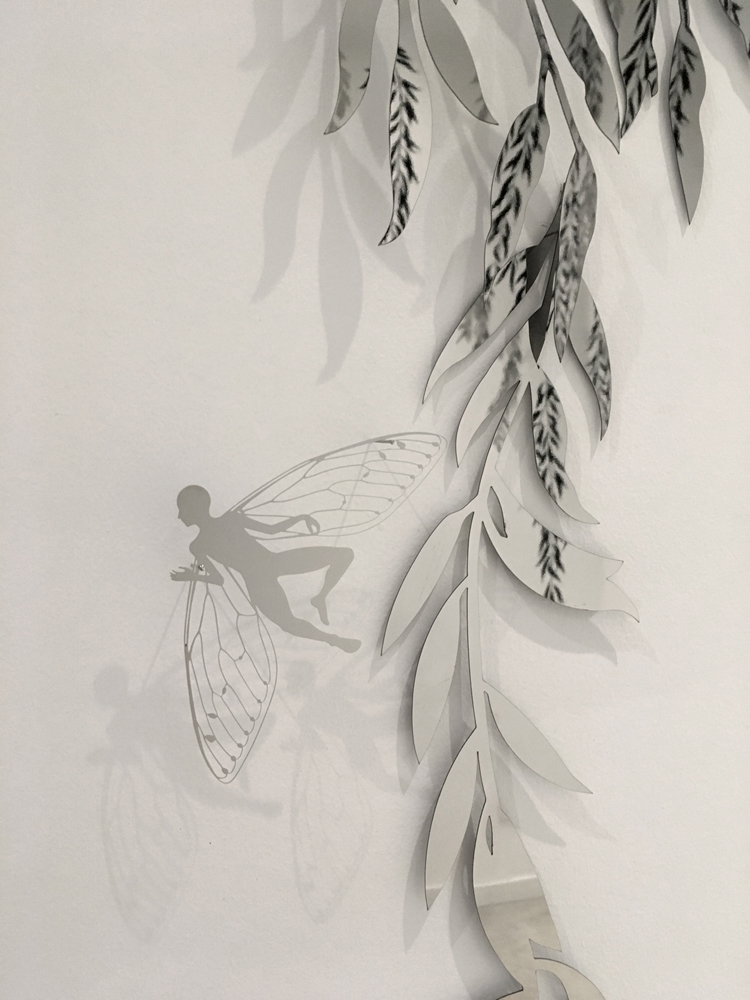 The willow tree has a long history of symbolism rooted in the spirituality and cultural rituals of many societies. There are references to the willow tree in the Celtic and Christian traditions, among others. One of the most valuable and unique traits of the willow tree is its flexibility, capable of bending into outrageous shapes without snapping. This can be a powerful metaphor for those in search of recovery or a spiritual path. Yan’s Under the Willow Tree is inhabited by figures that resemble western fairies with the wings of cicadae. It invites the viewer into an intimate and transformational space – a world suspended between the past and the future, between myth and science, and between home and away.

The artist gratefully acknowledges the support of the Chalmers Arts Fellowships program administered by the Ontario Arts Council.